Day 318 Of My Captivity - Alethea Wiles

The restaurant world keeps its own time. I've been the GM for nearly eleven months now but it feels like I turned around and a few seasons passed. I worked for Mr Morrisons when I was student up north doing night shifts at his slaughterhouse near Wakefield. I was a dinner lady serving breakfast at 11pm to men who'd previously worked on oil rigs. Lunch was around 3am. The other dinner ladies were usually married to the men, or would be, and the sons often came to work there too. We were all locked in together and the shifts would pass in a dreamlike state, as though non of it were real and we only existed at night. I once bumped in to one of the other women in the town centre mid morning and we exchanged shy hellos, feeling exposed outside of our parallel time zone.

Comparatively this job is a breeze. I mean, at no point during a busy night has anyone dragged me in to a staff room, handed me half a pint of cheap wine and a Lambert and Butler and said 'Get that down ye luv, it'll carry you through till finish.' Not that I'd complain. When I started at the slaughterhouse I asked one of the less terrifying women how many sausages, bacon etc I should put for each serving and she said: 'Put it this way, if they can see t'plate there'll be hell to pay.' Oh, okay. So, yeah, comparatively, this job is a breeze. Not easy though. I'm still learning. Every time I think I'm beginning to get my head around it all there's something new to learn, another element of the job that I've been shielded from until deemed ready. 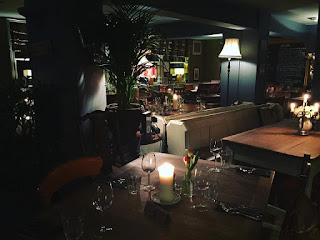 I need Lara, the previous Manager, less, but lord knows I still need her. She's my 'Restaurant Management for Idiots' guide. We're about to head in to our first Christmas together and she is bright eyed and bushy tailed whilst I stare at the already heavily booked calendar with a sense of mounting bewilderment. Of the staff who were here when I arrived only Lara and Simon remain. Everyone else I either employed or brought with me from previous jobs. So my safety nets have been slowly disappearing and more often now I find myself turning back to ask an adult what I should do and finding only myself there. My wonderful, utterly capable and profoundly chaotic Ali has moved to our new pub, The King Alfred, and is now quite rightly an assistant manager. I can't tell you how much I enjoyed taking that darling for granted. Apart from her multi tasking genius on the floor, she did a lot of background stuff that I consequently never had to think about. Until now. And Karon. Off she went and gave birth to a Henry. She'll be back though. Mark my words. Every time I get the place ready for an evening shift I think of Karon moving a table one inch to the right, adjusting a candle, all the little things that seem so inconsequential but strangely make such a difference. And then all the bright young things who come back for a month or two before heading off on their next adventure. So, obviously, I have some new staff.

There's Hannah, who in real life is one third of The Spitfire Sisters musical arrangement. She works for us around her gigs and much to all of our delights she'll be performing here during our Prohibition night for Winchester Cocktail week in February. All of the venues taking part will create two cocktails that wristband wearers can purchase for £4 each. I decided to serve ours in tea pots and keep to a prohibition style drink. Our cocktails will be The Mermaid's Tub and Moonshine Honey. It's all very exciting. We're using The Isle Of Wight Distillery and Fabian Chase (real name) is a mixologist who's helping me with my concoctions. Hannah is also a trained barista and makes the best coffees . 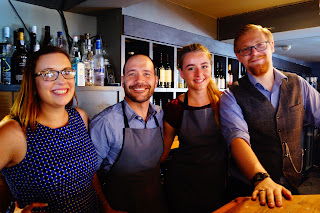 There's Dominic, Craig and Joshua who do a couple of shifts a week. Dom and Craig are students and very charming. Dominic in particular has been a hit with women of a certain age. I've had at least four come up to me after a meal and tell me he's 'just excellent'. Joshua does Viking re-enactments at the weekend and has promised I can come along one day. He turned up to work a few weeks ago with his hair carefully covering a fairly impressive battle wound.

My old timers of the new wave are Sam and Janna, who joined me from my last job shortly after I started and I don't know what I'd do without them. Sam's main response to anything I or a customer says is 'No problem'. Janna comes in and quietly does everything that needs to be done without fuss or difficulty. And then of course there is Benjamin. I worked with him a few years ago at Loch Fyne. He was my supervisor when I was a waitress and now he's my supervisor again. Oh how the tables turn! Well, not really. We don't much do hierarchy here. I write him long rambling lists of things that need doing and he does them and ticks them off as he goes. His girlfriend Rachel has come to work here too. She's a student also and has a good dry sense of humour and like all of them, just cracks on. 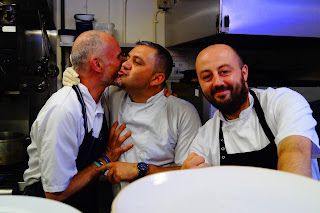 So, our first Christmas booking is on the 24th of November and then its just a roller coaster ride to New Year's Eve. We're having a Day of The Dead themed party and Lara and I are having a ball sourcing decorations, drinks, Mexican style tapas. Quite a few of our conversations feature Pinata's and skulls. We've hired a close up magician who didn't baulk at all when I asked him to dress in top hat and skull face. It's going to be a splendid night and when it finishes I'll crawl in to bed, wake up on New Years day and remember that I will officially have worked here a whole year. 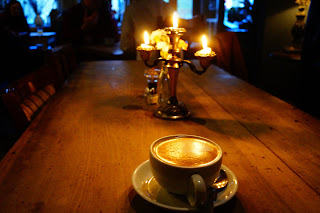 The restaurant world keeps its own time. It passes quickly though the days can be long. Our weekends are often on Mondays and Tuesdays. We stay up late and drink at each others businesses. We see more of each other than we do our non industry friends and family. It's often fun, it can be very satisfying. Sometimes you can get too knotted up about little things you can't control and then you step back and remember its all just a ride. The job ultimately is to feed and water people and make them happy. Hope they come back. Since extending our wine list to impressive proportions, adding cocktails and sourcing even more local beers we've started to see people just popping in for a drink which is hugely pleasing. I light the candles for breakfast, keep the lights low, turn the sign to 'Come in we're open!' and the day rolls on to night, and then again, and again. Each one different, each with its own challenges and rewards. 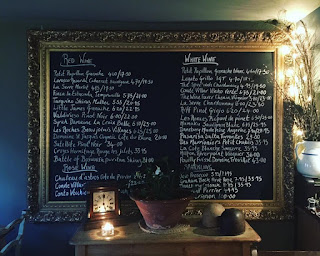